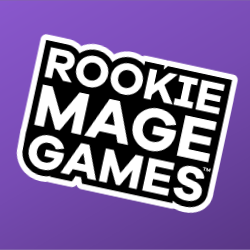 Jordan McLaughlin founded Rookie Mage Games in 2018 to bring his passion for rambunctious fun to others.

Born and raised in Central Ohio, Jordan was the kid that organized the superhero games at recess and made his cousins perform in plays he wrote (which they loved but refuse to admit it).

Jordan watched his first scary movie at a friend’s house when he was 14 (don’t tell his parents). He was instantly hooked and quickly became a fan of slasher flicks from the 80’s.

Jordan worked late evenings at the public library to create his first game, DON’T GET STABBED! He designed the mechanics, created the artwork, and planned production himself.

After the success of Don't Get Stabbed, Jordan has dedicated himself to creating new and creative ways for friends and families to gather around a table and have some fun.

Jordan currently resides in New Albany, Ohio with his partner Alex, who is really tired of being forced to playtest new game ideas all the time